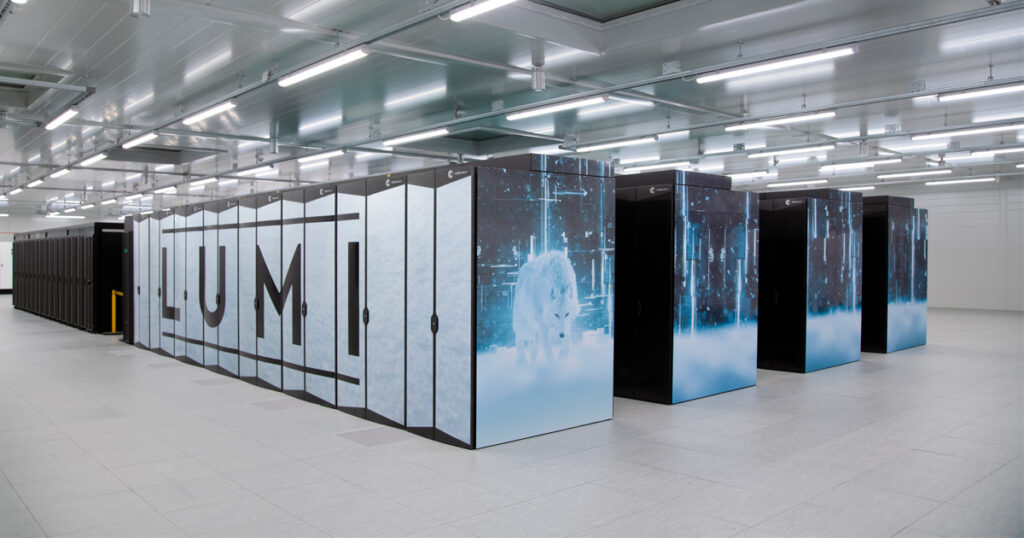 LUMI is the first pre-exascale supercomputer of the EuroHPC Joint Undertaking and is now Europe’s most powerful supercomputer. It will be inaugurated on Monday 13 June 2022 in Kajaani. LUMI offers European researchers a world-class tool for understanding complicated phenomena, such as climate change. LUMI serves as a platform for international research cooperation and for the development of artificial intelligence and quantum technology. Part of the resources of the computer will focus on industrial research and development activities. LUMI’s environmentally friendly solutions distinguish it from supercomputers known for their heavy use of energy. LUMI is a key tool in promoting digital and green transition throughout society.

LUMI is owned by the EuroHPC Joint Undertaking, and it is run by a consortium of 10 countries with long traditions and knowledge of scientific computing. Researchers all over Europe can apply for access to LUMI’s resources, which means that all of Europe can benefit from this new research instrument. LUMI has been set up in Kajaani, in one of the world’s greenest data centres, which is hosted by CSC – IT Center for Science Ltd.

–Today marks a major step for Europe’s digital and green transformation. LUMI is now the fastest and most energy-efficient supercomputer in Europe, and one of the most powerful ones in the world. Thanks to its massive computing capacity, LUMI will enable scientific breakthroughs in for instance medicine and climate research at a much faster pace. It could be in the development of vaccines, diagnosis of cancer, or mitigation of the effects of climate change. This is a great example of the enormous potential of artificial intelligence to improve our lives, Margrethe Vestager, Executive Vice-President of the European Commission.

–The societal challenges for which we use supercomputers exist on a global scale. The extent of these challenges, and the work required to tackle and transform them into innovation opportunities, requires much collaboration across many branches of academia and countless research teams. It therefore can only make sense that one of the biggest and most important research infrastructures should be based on extensive collaboration. In this, EuroHPC’s LUMI consortium collaboration is a pioneering effort to strengthen European competitiveness and digital sovereignty while promoting global research collaboration, says Anders Dam Jensen, Executive Director of the EuroHPC Joint Undertaking.

– LUMI is an ecosystem for high-performance computing, artificial intelligence, and data-intensive research, which enables breakthroughs in several branches of academic research. In addition, a fifth of LUMI’s capacity is targeted to companies that are getting the opportunity to use methods of next-generation high-performance computing and to give rise to new skills and innovation, says Managing Director Kimmo Koski, of CSC, which operates LUMI.

LUMI, Europe’s most powerful supercomputer, is also a partner for quantum computers

LUMI is Europe’s most powerful supercomputer. LUMI was ranked third on the latest Top500 list of the world’s fastest supercomputers, which was released at the end of May. LUMI’s massive computing capacity is primarily based on its many graphics processors, or GPU processors. They are especially suitable for use with various methods involving artificial intelligence, especially for deep learning. The LUMI supercomputer gives European researchers access to a world-class tool to help gain understanding of complex phenomena. Quantum computers need supercomputers alongside them to harness their capacity to the right targets as a part of the research process.

– Finland possesses a significant quantum technology knowledge hub – also on European level. The combination of high performance and quantum computers strengthens the attractiveness of the quantum ecosystem in Finland and in Europe. Jointly they create new kind of opportunities for scientific computing as well as for industrial research and innovations, states Mika Lintilä, Minister of Economic Affairs and Employment in Finland.

Quantum computers therefore do not replace traditional supercomputers. Instead, the technologies are linked inseparably, giving possibility to develop hybrid solutions that utilizes the best parts of classical supercomputing and quantum computing. LUMI has so far been linked successfully with two quantum computers: the Swedish Chalmers/Wallenberg Centre for Quantum Technology QAL 9000 – and to Finland’s first quantum computer, the Helmi operated by VTT.

What are supercomputers needed for?

– Efficient scientific computation is needed for doing top research in academic fields with a strong focus on data and computing, in medicine and climate research for example. Computer simulations help in studying phenomena such as climate change and the melting of ice caps, solving questions related to renewable energy and fusion energy, developing new vaccines faster than before, and finding more effective treatments and medicines, says Pekka Manninen, the CSC Director responsible for the LUMI supercomputer.

Digitalisation means making all of society more data intensive, which means that effective capacity for the analysis of large masses of data is needed in all fields and sectors of academic research. Digital humanities are a rising trend in high-performance computing in the 21st century. Social scientists and humanists have long used statistics, register data, and electronic language materials; digitalisation has brought new ways of doing research.

– Computational methods have moved forward at a dizzying speed in our field, notes Associate Professor Sampo Pyysalo of the TurkuNLP research group that is developing language models at the University of Turku, Finland.

The overall societal impact of supercomputers is significant. Research, development, and innovation activities conducted with them advance well-being, health, employment, and economic growth in a sustainable manner and for the long term.

– Science changes the world. With increasing computing capacity we get answers to diverse challenges in numerous different fields of research. LUMI opens new opportunities for international research cooperation and strengthens Finland’s profile as a knowledge-intensive country, says Petri Honkonen, Minister of Science and Culture in Finland.

Bringing digitalisation and artificial intelligence methods to a new level

– Compared with earlier studies, it is possible to do similar things, but faster. For example, if we can reduce the computing time from three days to three hours, we will be able to test new ideas at a faster pace. This accelerates the research process. LUMI also allows new kinds of research questions and the combination of different sources of data enables the modelling of increasingly complicated problems, notes postdoctoral researcher Kimmo Kartasalo of Stockholm’s Karolinska Institute.

LUMI is a key tool when modelling the digital twin of the Earth in the Destination Earth project, which is needed in research related to solutions to climate change.

– LUMI is a very attractive platform for many parts of Destination Earth. One of them is the actual supercomputing workload as the advanced Earth system models are very compute-intensive and could greatly benefit from the GPU acceleration that LUMI offers. Another aspect is machine learning, which is the only realistic way to extract information from vast amounts of diverse data for the wide range of applications that DestinE will serve. Also here, LUMI offers unprecedented capabilities, says Dr. Peter Bauer, Director of Destination Earth at of the European Centre for Medium-Range Weather Forecasts (ECMWF).

A significant part of the carbon footprint of the ICT sector comes in the building phase of infrastructures. The carbon footprint of LUMI has been significantly reduced by placing the machine on the premises of a former paper mill in Kajaani, Finland, enabling it to utilise the existing municipal engineering. Thanks to the cool climate of the region very little energy is needed to keep the computer cool.

However, even energy-efficient supercomputers consume plenty of electricity, which means that the way that the electricity is generated is of great significance. LUMI gets all of its electricity from 100 percent renewable hydroelectric power. In addition, the waste heat produced by LUMI will be utilised in the district heating network of Kajaani, which means that its overall carbon footprint is negative. The waste heat produced by LUMI will provide 20 percent of Kajaani’s annual demand for district heat.

As an indication of its energy efficiency, LUMI won an international prize in late 2021 for the best sustainable development innovation in the field of high-performance computing, and it finished 3rd on the Green500 list for supercomputers that was made public in May 2022. Kajaani is an ideal location for data centres, which have an extensive impact on the climate. With the help of efficient telecommunications links, a supercomputer as a shared resource can be used from anywhere, and it is worth setting up in a location where it is most efficient from the point of view of cost, energy consumption, and the environment. 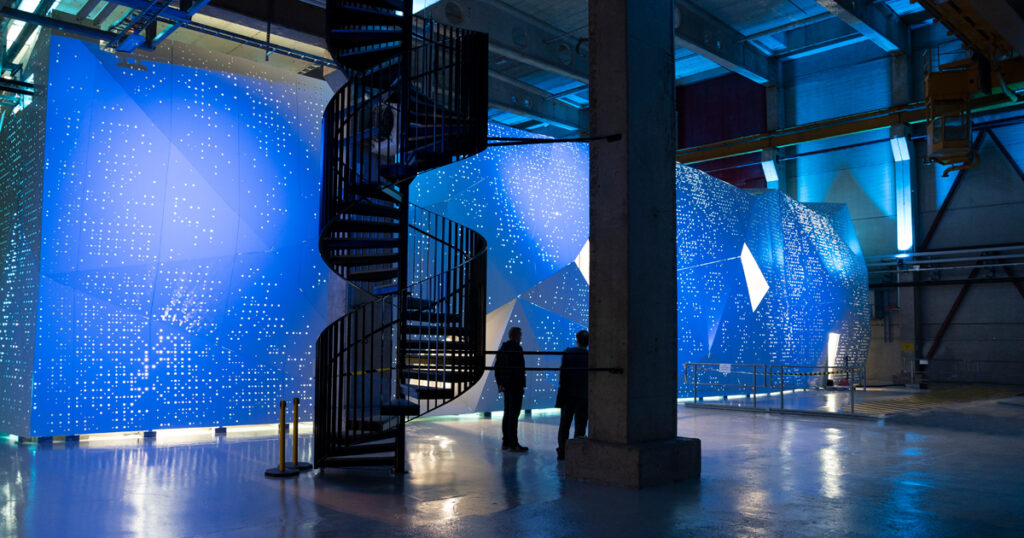